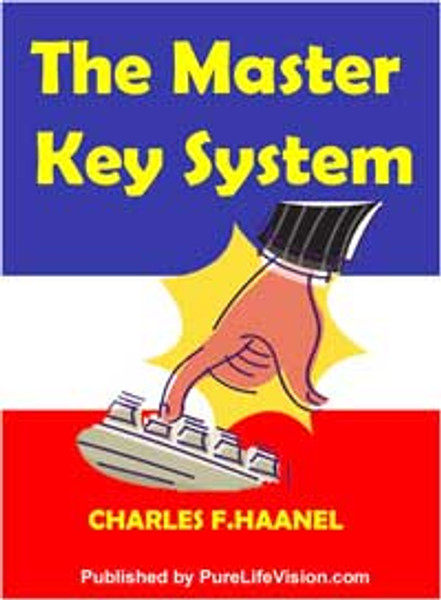 SKU:
PLVDW10002
Availability:
Buy any volume of Think Success and Download the Masterkey System For FREE!

Title: The Master Key System by Charles F. Haanel Format: PDF Number of Pages:171Dimensions: 8.5"/11" Current Offer: Buy any volume of Think Success and Download the Masterkey System For FREE! Charles F. Haanel was born in Ann Arbor, Michigan, on May 22, 1866 to Hugo and Emeline (Fox) Haanel." He was the fourth of six children. The family moved to St. Louis, Missouri when Charles was a child. He joined the National Enameling & Stamping Company in St. Louis as an office boy and worked for this firm in varying capacities for fifteen years before venturing out on his own as a writer and businessman. In 1885 he married Esther M. Smith. They had one son and two daughters. In 1891 his wife died. In 1908 he married for the second time, to Margaret Nicholson of St. Louis, whose father was W. A. Nicholson. He was a member of the Republican Party, a Freemason, a member of Pi Gamma Mu Fraternity, a Fellow of the London College of Psychotherapy, a member of the Authors League of America; a member of the American Society of Psychical Research; a member of the Society of Rosicrucians, a member of the American Suggestive Therapeutical Association; and a member of the Science League of America. During his life, he earned and received several honorary academic degrees, including hon. Ph.D., College National Electronic Institute; Metaphysics, Psy. D., College of Divine Metaphysics; and M.D., Universal College of Dupleix, India. When Haanel died on November 27, 1949; he was 83 years old. His ashes were buried in Bellefontaine Cemetery, St. Louis, Missouri USA. Hannel's book The Master Key System, was published in 1912, when he was 46 years old. It is written in the form of a course in New Thought, mental development, financial success, and personal health. The book was heavily promoted in the pages of Elizabeth Towne's New Thought magazine The Nautilus. By 1933 it had sold over 200,000 copies worldwide. Haanel practiced the financial principles he preached and was a self made success who owned several major companies. According to Stevens, writing in 1909, "He was president of the Continental Commercial Company, president of the Sacramento Valley Improvement Company, and president of the Mexico Gold & Silver Mining Company." The original Master Key System contained 24 parts or modules of study. The allegedly "lost" chapters of the Master Key System, chapters 25-28, which are found in some editions, are not original, but have been copied from the chapters 11-14 of A book about You. Among the key points of Haanel's system are what he refers to as the laws of concentration, attraction, and harmonious thinking and action. Unique to the Master Key System is a set of exercises that accompany each chapter, and which are systematically building upon each other - they are what makes the Master Key System a system. In addition to the Master Key System, Haanel wrote several other books including Mental Chemistry published in 1922, The New Psychology published in 1924, A Book about You published in 1927, and The Amazing Secrets of the Yogi published in 1937 (which was co-authored with Victor Simon Perera). The Master Key System discusses the creative power of thought, the deep connection between the world within or the mind and the Universal Mind. By understanding how it works, we can effectively reach our goals, become prosperous and remain in control of our lives. The master key is our own mind power, both the conscious and the subconscious minds and their connection with the Universal Mind which is described generally as God or the power of God. What we desire, think and feel within ourselves is reflected in the world without. When we realize this great secret, this immense power which we all possess, this master key, we become masters of our own lives and unlock the immense powers and potentials residing in our minds and bodies. In the process we also learn to act responsibly, with awareness and right attitude. (Source: Wikipedia).

You will be able to download the digital book after checkout, once your payment is confirmed.

Ebook The Secret Of The Ages By Robert Collier

The Awakened Life : A Collection Of Writings On Spiritual Life

The Bhagavadgita A Simple Translation

Essays on the Bhagavadgita